Showing posts from 2019
Show All

“P assion alone can’t drive you to do something, you must also be committed to it.” Nabarun Bose gets close and candid with us while delineating his work experience in the Bengali Music Industry as of now . Starting from being the Keyboardist at the “The Anupam Roy Band”, to composing his own music for the critically acclaimed film “Rainbow Jelly”, and other web series like “Kaali” , he has also been an integral part of “The Prophesor”, “Enolaton” and  has come a long way.           As to whether he always thought of pursuing music as his profession, he said that he always wanted to do something performance oriented. He enrolled himself in co-curricular activities like theatre and music and also learnt playing the Sitar in the very initial stage of his life at the will of his mother to which he didn’t pay much heed as a child. ‘I grew up in a home that had an aura of music, my mother being an Indian Classical vocalist and my father savouring all kinds of music, the environm
Post a comment
Read more 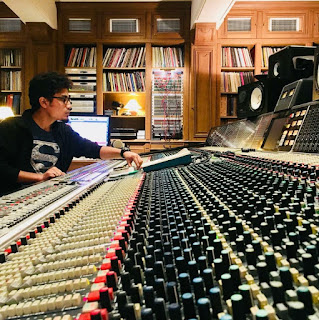 “There’s not much scope for emotions for a freelancer, but my work is completely emotionally driven” -says Abhibroto Mitra , one of the rising sound engineers of the city. Abhibroto has worked with Cactus, Lakkhichhara, The Bodhisattwa Trio, Underground Authority to name a few and has been a part of the Friday Night Originals since its inception. Currently working as a free lancer, he is also the in- house audio engineer for BlooperHouse Studios . Here’s a glimpse of him opening up to us about himself.  Interviewer- What is Music to you, what is that which drew you towards it ? Interviewee - Music is the only language that works for me , in fact it’s the only form of communication that very fluently translates a sentence which might not have been able to express itself by the same . However, where it’s difficult to frame the emotion or convey a message through words, it might as well be able to express itself through a song written from the heart. Interviewer- Kno
1 comment
Read more
More posts