What Seems Un-Natural is Also Natural-LGBT 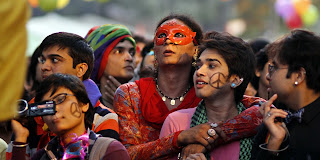 Today homosexuality is a much debated topic with much hatred, fear, prejudice, violation of constitutional rights for civil society and the government of India. Homosexuality- should be legalized or not, it is natural or unnatural, it should be criminalized or decriminalized, these questions are raised before the people of India many times and in many forms.

India is one of 75 countries around the world that outlaws homosexuality. According to declassified Government reports submitted in Supreme Court 2.5 million gay people recorded in India. These figures only based on those individual who self-declared to the ministry of health. There may be higher statistics for individual who concealed their identity with fear of discrimination.

The discussion of homosexuality or sexual topics are rarely discussed openly, our people have mindset particularly in villages that they do not accept what is becoming acceptable in the world specially in western countries. But we also have to keep in our mind whether we are as advanced as these so called Western Countries. The lack of support from family, society, police, government, the LG BT people facing mental, physical, economical violence and most of do not report the crime against them to the police with fear that they will be punished too.

The attitude towards homosexuality has slightly shifted with help of media, news and NGO’S. They openly expressed their support for decriminalization of homosexuality. In September 2006, noble laureate Amartya Sen, acclaimed writer Vikram Seth and others prominent Indian ‘Master Minds‘ publically demanded to repeal Sec. 377 Of Indian Penal Code (Sec 377 If IPC makes homosexuality sex punishable by law and carries a life imprisonment). The congress MP Shashi Throor also presents a LGBT bill to decriminalized homosexuality in parliament, which was rejected by the opposite party with the ratio 24/17.

On 2nd July 2009 in Naz Foundation vs, Govt. of NCT Delhi, the Delhi HC held that provision to be unconstitutional with respect to sex between consenting adults, but supreme court of india overturned that ruling stating that the court was instead differing to Indian legislators to provide the sought after clarity . However, on 2 February 2016, the final hearing of the curative petition submitted by the Naz Foundation and others came for hearing in the Supreme Court. The Three member bench headed by the Chief Justice of India T. S. Thakur said that all the 8 curative petitions submitted will be reviewed afresh by a 5 member constitutional bench..

Under constitution all citizens have equal rights and the basic principal of our nation is equality, justice and a fair life for everyone, regardless of sexuality, caste, and identity and nobody have the right to suppress the human rights. India is an independent nation and everyone have a right to take their decisions independently. If homosexuality is not legalized then these people will continue their activity secretly and no law can stop them ,legalizing it will definitely reduce the crime against these LGBT persons and they no more need to hide their identity , they also lives their life happily and can take their own decision as they want.

Even the Hinduism is also not considered homosexuality, a crime. In Bhagawat Geeta it is mentioned that ‘’what seems unnatural is also natural’’ throughout the centuries Hinduism has been the most tolerant religious system, there are many Hindu methodology stories of alter net sexual choices. The religion always support in shaping Indian customs and tradition, it is we who always criticize the making of god.

Noble Verses 26:165-166, 27:55, 29:28-29 were sent to me by brother Bassam Zawadi, may Allah Almighty always be pleased with him:
"Would ye really approach men in your lusts rather than women? Nay, ye are a people (grossly) ignorant!  (The Noble Quran, 27:55)"
"And (remember) Lut: behold, he said to his people: "Ye do commit lewdness, such as no people in Creation (ever) committed before you. "Do ye indeed approach men, and cut off the highway?- and practise wickedness (even) in your councils?" But his people gave no answer but this: they said: "Bring us the Wrath of God if thou tellest the truth."  (The Noble Quran, 29:28-29)"
Considering it to be a Sin.

The Seventh-day Adventist Church "recognizes that every human being is valuable in the sight of God, and seeks to minister to all men and women [including homosexuals] in the spirit of Jesus," while maintaining that homosexual sex itself is "forbidden" in the Bible. "Jesus affirmed the dignity of all human beings and reached out compassionately to persons and families suffering the consequences of sin. He offered caring ministry and words of solace to struggling people, while differentiating His love for sinners from His clear teaching about sinful practices."
The Catholic Church states that "homosexual tendencies" are "objectively disordered", but does not consider the tendency itself to be sinful but rather a temptation toward sin. The Church, however, considers "homosexual acts" to be "grave sins", "intrinsically disordered", and "contrary to the natural law", and "under no circumstances can they be approved". The Eastern Orthodox churches, like the Catholic Church, condemns only homosexual acts. All Orthodox jurisdictions, such as the Orthodox Church in America, have taken the approach of welcoming people with "homosexual feelings and emotions," while encouraging them to work towards "overcoming its harmful effects in their lives," and not allowing the sacraments to people who seek to justify homosexual activity. The Catholic Church views as sinful any sexual act not related to procreation by couple joined under the Sacrament of Matrimony.

In this land, it is the soul that is important. The body is just temporary. Everyone should have a right to live a happy and normal life. Homosexuality is not a person’s own choice, knowingly or unknowingly it has been prevailing in the world for centuries. In india homosexuality is always looked down upon. It is kept hidden as the people are afraid to accept something that they have been conditioned to despised. Lack of knowledge and information is blocking the peoples mind about these things.

Now You Decide which side Should You BE..... Beside THEM or Against THEM...... 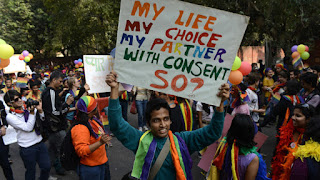