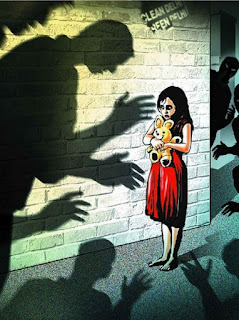 A three-year-old girl was allegedly raped by a juvenile  who slit her throat after committing the crime in Ludhiana.

The girl's father, a vegetable vendor, in a police complaint alleged that a 13 year old youth from his neighbourhood yesterday raped his daughter when she was alone in his house in Manjit Nagar area.The accused, a labourer, then tried to kill her by slitting her throat.
The girl was found in a semi-naked state. She was bleeding profusely and rushed to a hospital, where doctors said her condition is stable. The accused has been arrested on charges of rape.  It's a case of rape and attempted murder.

So why are we so scared of talking about sex? What kind of twisted logic drives  our parents, teachers, and education ministers to protect children from sex education, and perpetuate the vicious cycle of cultural taboo and dangerous misinformation?

Parents be like "Sex education is not for my child…it is obscene; teaches our children to have sex at an early age." But this is wrong. Lack of knowledge and lots of misconceptions are leading these types of cases in India. Illiteracy, gender stereotypes, no sex education,etc are encouraging young boys to rape young girls,even infants.

Children are naturally curious about sex. Denying them the correct, scientific information leads them to seek knowledge from other sources, such as friends, movies, or the Internet. These promote rumours, misconceptions, and half-baked truths that are dangerous, and without any trusted source to clear them up, perpetuate well into adulthood.

In India, a shocking 53% of children between the ages of 5 and 12 have been subjected to sexual abuse.That’s more than half. The culture of silence and shame surrounding sexual issues means that the victims cannot speak up, often, they don’t even know that they are being abused.