Kane Williamson's gamble to compromise on speed paid off. Before the match today he picked three specialist spinners which resulted in New Zealand’s victory by 47 runs in a spin-dominated Super 10 contest of the World Twenty20 on Tuesday. 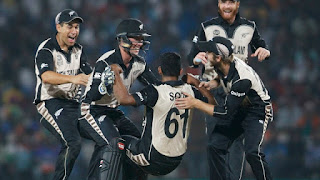 Opting to bat first, New Zealand posted 126-7 in the Group Two contest on a prodigiously turning track at Nagpur's VCA Stadium, seemingly a below-par total against the host nation who are famed for their proficiency against spin bowling.

India were obviously the favorites till the end of their Innings.
New Zealand's three-pronged spin attack, however, ensured it was more than enough as Mitchell Satner (4-11), Nathan McCullum (2-15) and the Indian-born Ish Sodhi (3-18) wrecked the hosts who folded for 79 in 18.1 overs.

The first three balls of the match contained the kind of drama and excitement that fans would be expecting from the sixth edition of the tournament in cricket's emotional and financial home in India.
After Williamson won the toss and decided to set a target, Martin Guptill nonchalantly hit the first delivery from Ravichandran Ashwin over the bowler's head for a six.
The off-spinner settled score in the very next ball, trapping the batsman leg before with a delivery that, replay suggested, would have gone over the stumps. New man in Colin Munro reverse hit the next ball for a six but threw his wicket in the next over. 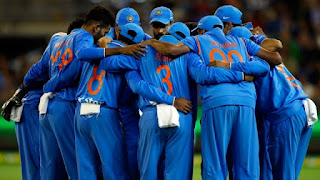 As wickets kept tumbling at the other end, Corey Anderson (34) tried to steady the innings and it was Luke Ronchi's (21 not out) 11-ball cameo that took them past the 125-mark. The Indian fans expected the chase to be a stroll in the park but McCullum and Santner had other ideas.
They blew away India's top order, reducing them to 26-4 in the fifth over to derail their chase. Virat Kohli (23) resisted the onslaught for a while but Sodhi struck a crucial blow with his very first ball to send back the Indian batting mainstay.
Home captain Mahendra Singh Dhoni waged a lone battle with a run-a-ball 30 but the celebrated 'finisher' could not get his team over the line.