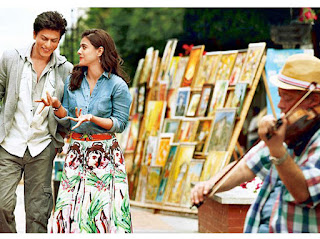 
Dilwale '​s film score is composed by Amar Mohile with songs composed by Pritam Chakraborty and lyrics written by Amitabh Bhattacharya.
Dilwale, the film's soundtrack album, was composed by Pritam Chakraborty. A track titled "Gerua" was released on November 18, 2015 as the first single prior to the soundtrack album's release.The second single to be released was "Manma Emotion Jaage". The album features seven tracks, and was released on December 4, 2015 by Sony Music India.

What it's about: The USP of Rohit Shetty films is that they are family dramas with big dollop of drama and action that appeals to children and adults alike. However, Dilwale at it's crux is a love story. It's as much about cars blowing up, as about hearts breaking. There are two parallel love stories. One is Veer (Varun Dhawan) and Ishita (Kriti Sanon) and the one that began many years ago. Raj (Shah Rukh Khan), son of a don, meets and falls in love with Meera in Bulgaria. But they are driven apart because of their families. Tragedy strikes both lovers and they return to their homeland. Many years later, they are still both single and their siblings decide to get them together. Kali and Meera have another secret between them that they don't reveal to their brother Veer and Ishita. Meanwhile Raj's dark past comes to the fore every time Kajol and Vir are threatened and he ends up making an enemy of Local hood King (Boman Irani). But it all ends well. The family that fights together, stays together. 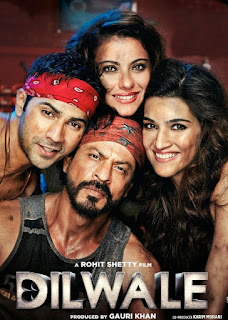 Pros: Dilwale is a love story that relies heavily on the chemistry between Kajol and Shah Rukh and that works. They still have the magic and you can't help but sway to the music that plays in the background every time they cross paths. Shah Rukh Khan plays the adopted older brother rather well. Remember Kabhie Khushi Kabhie Gham with Hrithik? In Dilwale too the scenes between him and Varun bring warmth to the heart and smile on the lips. Whether he is romancing Meera, playing the big brother or bashing skulls as Kali, it all comes to easily to SRK. The film works because of him and Kajol, who delivers an utterly moving and believable performance whether she is spewing fire or ice from her eyes. The films has many funny moments (when Vir confessed his love story to Raj) but there aren't as many as in Rohit's Golmaals and All The Best. The funniest scene of the film comes from Pankaj Tripathi and Mukesh Tiwari when they reveal the Raj's past to Vir and Ishita. The action scenes are very well shot, no one does that better than Rohit. Kriti Sanon looks pretty and does her best with the role she has.
Cons: It's time to do away with the hero's sidekick friend. It's just a nuisance. the whole angle of Vir's friend (Varun Sharma) and especially his justification scene of why he steals (because it's expensive to have a girlfriend) will make you cringe. While it's ok to be inspired by films, it's not ok to lift scenes from TV shows (the five-minute-romance from How I Met Your Mother and movies (the I-love-you message on placards from Love Actually). You expect it in a Bhatt film, but not in a Rohit Shetty film. He is a honest filmmaker. Like he said Raj's dark past is nothing like Tiger's in Hum. The only connection between Dilwaleand Chalti Ka Naam Gaadi is the garage. However, the Dilwale story is a big let down. You can see it all coming, (except Kajol's identity)  the siblings connection, the shootout between the two fathers, and even the climax scene with King. Even Boman Irani could not save the fruity character he played. Varun comes off as too enthusiastic. His character is aimed at being a people-pleaser but it fails. You also wonder why are the characters always going in and out of churches for "Christmas party" and church wedding when none of them belong to that faith? 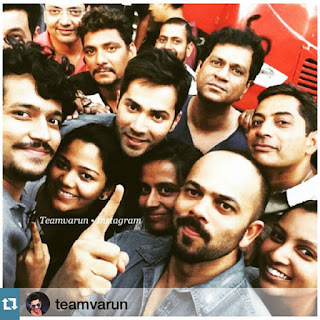 Dilwale made around 150 crore (US$22 million) worldwide in its opening weekend, the third highest of the year.
India
The film, releasing alongside Bajirao Mastani, opened number one at the box office, and collected 21 crore (US$3.1 million) nett in India on its opening day, the third highest of the year after Prem Ratan Dhan Payo and Bajrangi Bhaijaan. The film showed little drop on its second day, and earned nearly 20 crore (US$3.0 million) nett. Dilwale had good growth on Sunday, and added more than 23 crore (US$3.4 million) net, taking the weekend to over 64 crore (US$9.6 million) net.
Overseas
Dilwale had the highest opening of 2015 abroad and the second highest ever, with a weekend gross of around $8.5 million. The film also set an all-time record opening in the Gulf.