On the 26th of April a seminar for empowering youth voices to combat human trafficking was held in the American Center. I was privileged enough to attend it and it was really an eye opener. Human Trafficking is the action or practice of illegally transporting people from one country or area to another, typically for the purposes of forced labor or commercial sexual exploitation.

It is a major issue in our country but is often ignored as non-existent. We feel that human trafficking is a problem which only affects the illiterate or the poor. This is a myth which was busted in this seminar. Several facts were highlighted like trafficking happens every day, and in nearly every community. It might be occurring in the neighborhood without your attention and functioning a full scale racket. 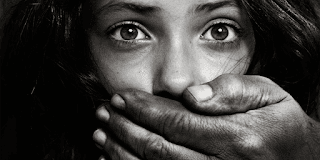 The seminar also emphasized that Human trafficking is one of the most tragic human rights issues of our time. It splinters families, distorts global markets, undermines the rule of law, and spurs other transnational criminal activity. It threatens public safety and national security. But worst of all, the crime robs human beings of their freedom and their dignity. That's why we must pursue an end to the scourge of human trafficking.

Trafficking victims can be men, women, children, citizens and non-citizens alike, from all socio-economic groups. It was revealed that according to a survey more than 80% sexual exploitation is done to men, for the sole reason that they do not speak up and the crime gets dismissed. The stigma which exists around women always needing to look good and the stereotype that men should be macho and manly every moment also contributes to human trafficking.

We also due to lack of awareness at times contribute to these heinous crimes. The chocolates we buy consists cocoa which is often collected by children who have been trafficked for the same. Even the mattresses we purchase, the material of it is brought by trafficked humans. A minor step here would be inquiring about how they were made and who contributed to it. At times its mentioned on the packages of products, it can be hence avoided.

It’s important to encourage people that they have a role in fighting against it. Firstly be aware for self safety and also report if you know of a suffering victim. Shakti Vahini is an organization which rigorously works for the safety and rescue of human trafficking victims, contact them in case of any help required at shaktivahini@yahoo.co.in