Chitra is an upcoming Bengali feature film which is going to release on the 28th of August 2015, across all leading movie screens of  West Bengal. It has been written and directed by Debut-Director Mr. Abhigyan Mukherjee. At the mere age of 24, where most of us are struggling to find a job, this fellow has written and directed this movie all by himself and we from the iYouthMag family surely hope that his directorial debut becomes a Box Office hit and sets the cash registers ringing!
Chitra is about love, revolt and raising a voice against crimes in a society so evil that it sometimes separates two people in love. The film has Neel Bhattacharya and Pujarini Ghosh as the leads, portraying the characters of two modern day youngsters in love. Neel is an NRI while Chitra, the eponymous character played by Pujarini, is a college student. They fall is love while the villainous society stands against their love story. Chandrima, played by Sushmita Bhattacharya, is Chitra’s elder sister who helps Chitra break her shackles from the conservative surroundings and steps forward to revolt against the society that has separated the couple in love.

The music launch of Chitra was an extravagant event which was held at Princeton Club, Kolkata on 12th of August ‘15, and it started around 6:30 in the evening and continued till 10 at night. The Event had a large turnout with various notable personalities from Tollywood which included Neel Bhattacharya, Pujarini Ghosh, Sushmita Bhattacharya , who play the leading roles in the movie. Apart from various actors and actresses turning up at the event there were some of the notable music personalities as well which included Somlata Acharyya, Mohul Chakraborty, who also composed the music for this film, Timir, Ujjaini , Mouli, Sidhu, Rupankar and there were special live performances by the various singers for those present. 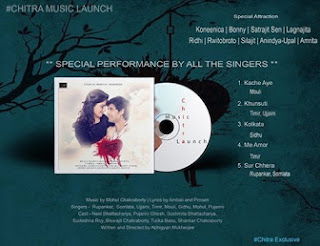 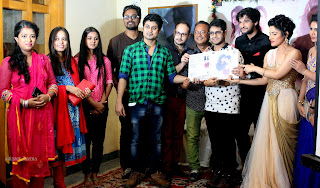 THE MUSIC LAUNCH OF CHITRA BY THE ENTIRE CHITRA TEAM

At  the launch, there was a screening of some of the songs from the movie, and undoubtedly they were as good as the singers who have sung them.

“Sur Chera”, for example, is a beautiful song which will touch many hearts for sure. We had some exclusive interviews with the cast and singers as to what their expectations were from the upcoming movie which has just a few days to go before it hits the screens.
Asked about his experience with the movie and his expectations, a very modest Abhigyan Mukherjee said that he was just a young guy who is trying to make a name for himself in the industry and he knows that he has a lot to learn and a long way to go but he does hope that his directorial debut is a huge hit and the people accept his movies and ideas with a lot of love.
Neel Bhattacharya is a very popular actor already, with his successful mega-serial “THIK JENO LOVE STORY“, is making his debut on the silver screen opposite debutant Pujarini Ghosh. Neel said that acting is his passion. He said that he was really excited about his debut movie and hoped that it would  become as successful as his show.
Pujarini Ghosh was super-excited for the music launch and she said that she literally had butterflies in her stomach when she saw her movie posters at various leading cinema halls just before the release on 28th of August. She expects a lot from the movie as she has put in her heart and soul into portraying the role of Chitra in the movie and she expects people accept her and appreciate her effort.
Sushmita Bhattacharya was too excited about the movie as she plays a pivotal role in it and hoped that the society would the message that the movie is trying to portray.
Somlata, when asked about her experience in singing in the movie, said that she was really happy with the songs in the movie and hopes that people may love them because each song has a deeper meaning associated with it. The other singers too said the same thing with Dodo aka Mohul Da saying that he believes that the movie is going to be a superhit not only cause  because it has the best singers in  the industry lending their voices, but also it has some excellent actors and a deep message associated with it. Timir, Sidhu, Mouli all were really happy with their songs
After the Music Launch as well as a special live screening for those present came to an end , there was a sumptuous dinner buffet served and everyone left with a smile on their faces as our humble Director Abhigyan presented everyone with the Music DVD of his movie. Everyone present had a great time, talking to and meeting  so many notable personalities and everyone duly enjoyed the music of the movie as well as the story, told through the trailers and we at iYouthMag sincerely hope that this movie has a grand run at the Box Office.
We wish all the best to the entire team of CHITRA! We sign off with a special thanks to Mr. Abhigyan Mukherjee and here’s wishing him all the best for his directorial debut. As for our readers, please go and see CHITRA when it releases on 28th August 2015 at the theatre near you and we do hope you enjoy it. Stay tuned for more exciting information and to get to know more about this movie, follow us on Facebook, Twitter, Instagram !! 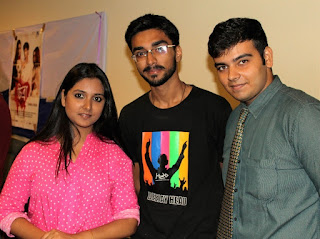