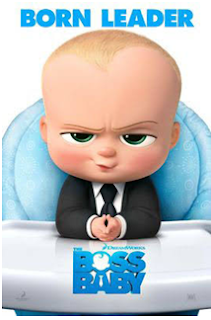 The Boss Baby is a 2017 American computer animated comedy film, loosely based on the 2010 picture book of the same name written and illustrated by Marla Frazee. The Boss is a great concept of animation. I mean the way a baby that’s dressed in a fancy suit, runs a business with multiple diaper wearing employees. The Boss Baby is presented as a centerpiece but the plot is seen from tim’s perspective. Tim a seven year old boy helps his new brother boss baby to fight the war between babies and puppies. 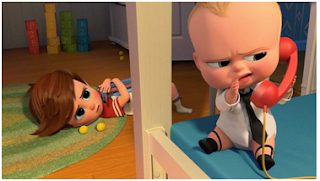 The Boss Baby sounds like a killer concept for an animated caper to attract kids, young and old. The plot is creative, the characters are entertaining and cute and after all who doesn’t like baby? Here the baby is a lot different that you might be used to seeing in movies. The boss baby is clever witty and entertaining. He behaves as an adult and looks pretty cool in wearing the suit. When Tim suddenly meets the most interesting suit wearing boss baby, he never saw in his life. After a while he ends up helping the boss baby go on the mission to end the war between babies and puppies. Especially the scene where Tim and the boss baby are at airport and the baby replies, “I can’t do this without you Tim.” Tim replies, “Yeah, we make a pretty good team.” 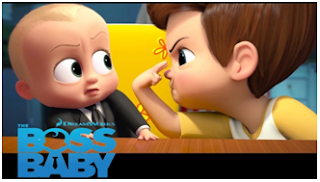 Alec Baldwin is a good choice to voice boss baby. He has this manly voice and its hilarious to hear boss baby speak in a deep voice. The creativity of the movie is really interesting. Even though most of it is seen from Tim’s point of view, it can easily be seen and understood from boss baby’s point. The both seek something and is dependent and only coming together makes them achieve their goals.

Verdict: A great way to make you fall in love with babies again.
Kids are annoying, and that’s a fact! They are little brats, whose screams we can hear over our noise-cancelling headphones. They are needy, whiny, and get away with anything they do. One of our worst nightmares probably is spending long hours with a baby on public transport.
The Boss Baby explores the adorable bond that siblings share. Even if you don’t like babies, The Boss Baby makes a great watch, because the baby is not a real baby. At least not the kind who cries, and coos, and burps. The Boss Baby is a fully matured adult in the body of a baby. And he is the boss! 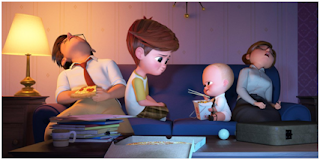 Why You Should Watch This Movie:
The movie is best enjoyed with your sibling, as you will relate to those struggles of growing up with one. Otherwise, it still makes for a fun watch, with your friends and family. This is a perfect movie to unwind, and enjoy a few laughs, especially after a tough day at work.