ALL THAT YOU MISSED IF YOU DIDN'T ATTEND TAARANGANA 2018 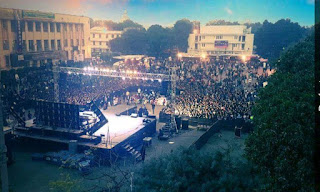 Taarangana is the annual cultural extravaganza of Indira Gandhi Delhi Technical University for Women. The fifth edition of the fest was held on the 2nd and 3rd February, with it's theme as 'The Sentinel Saga'. 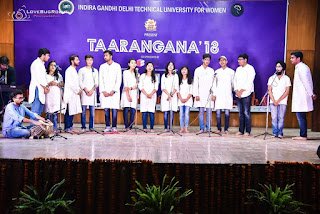 The first day of the fest was filled with awe-inspiring events. The day started off with 'Alluring Whispers', a group dance competition which gave the audience breath-taking performances to rave about. 'Antraa,' the classical group singing competition was a musical journey that infuser goosebumps with their perfect synchronization. The main stage was set on fire by the vibrant and attractive fashion parades of various colleges during 'Lilac Dreams' and the audience in the auditorium was entranced by the glamourous affair, 'FBB Campus Princess’ judged by ‘Peter England Mr. India 2016’ finalist - Mr. Viren Barman. 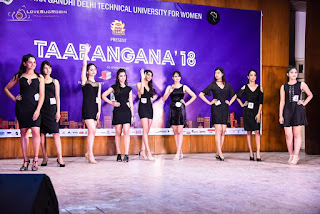 As the clock struck 5, the campus was sent into a tizzy. Hordes of people gathered about near the main stage to reserve the best spots so that they could watch the hilarious comic stylings of stand-up comedian, performer and the host of his very own talk show, ‘Son of Abish’- Abish Mathew. After his laughter-inducing and relatable stand up set, the much awaited EDM night began, with the crowd swinging to the sick beats of the #56 DJ in the world - DJ Diego Miranda. The audience couldn't help but jam to the infectious music and dance the night away.

The second day kicked off with 'Knights of the fall': an epic battle of the bands' electrifying instrumentals and smooth, jaw-dropping vocals. 'Urban Thump' followed up, leaving the audience enthralled by the stunning synchronization of the dances. 'Slam Poetry,' newly introduced into our event list, left people moved, speechless, and inspired. 'Aaghaz', the street play competition was definitely a must watch for those who appreciated passionate performances. 'Mr and Ms Taarangana' became a quick crowd favourite, owing to the interesting theme and repartee of the contestants. RJ Yuvi was the judge for this event. The infamous 'Blind Dating' was also a massive hit which witnessed a huge turnout and set the ball rolling for upcoming Valentine's Day. 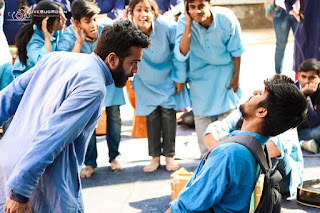 As evening approached, the audience geared up for the second star night. Famous folk rock fusion band 'Lagori' took to the stage and entertained the audience by belting out famous tracks as well some self-composed ones. Everyone thoroughly enjoyed the performance and couldn't help but groove to the energetic tracks.

Taarangana concluded on a high as Lagori Band playing a game of catch with the audience and gave them some magnificent memories to cherish for the rest of their lives.

So stay tuned, because Taarangana is definitely set to return next year. Enthralling the audience and giving them a memory to cherish, Taarangana promises to bring nothing but the best of all.