LOOKING BACK AT WHAT REALLY HAPPENED


THE HONOR OF JAUHAR 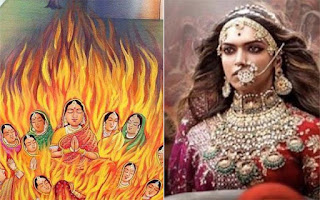 With the release of the movie Padmaavat, there have been several discussions over the issue of magnifying the practice of Jauhar. Jauhar to be precise is the Hindu custom of mass self-immolation by women in parts of the Indian subcontinent, to avoid capture, enslavement and rape by any foreign invaders, when facing certain defeat during a war. This has been compared to Sati innumerable times, it is a former practice in India whereby a widow threw herself on to her husband's funeral pyre. I ,as every free citizen of this country have a right to put my views forward on this issue.

Let us go back in time and analyze the history of Rajputs, who commonly practiced Jauhar, and only restrict it to Chittor, where Rani Padmaavati had performed the Jauhar with many other women. The first jauhar of Chittorgarh occurred during the 1303 siege of the Chittor fort. Rani Padmini the main character, wherein she and other Rajput women commit jauhar to avoid being captured by Alauddin Khalji of Delhi Sultanate. It was her choice to not let her pride and respect be tampered with. The women who accompanied her were wives of the soldiers going to fight the war. All of these women chose to sacrifice their lives, to safeguard their honor. How unrealistic it may sound to many today but in those times the glory was in being united with their husbands. Being submissive and surrendering their prestige for the mere breaths was not the Rajput ethics. To think it in context with today where the law prevails and the perpetrators are punished is quite invalid, in those times the only law prevalent was the one made by the king who conquered, there was no escape or relief for women then, that is why the valiant women gave up their lives to maintain their integrity. The second occurrence of Jauhar was when Rana Sanga died in 1528 CE after the Battle of Khanwa.

Shortly afterwards, Mewar and Chittor came under the regency of his widow, Rani Karnavati. The kingdom was besieged by Bahadur Shah of Gujarat. Rani committed Jauhar with other women on 8 March 1535, while the Rajput army rallied out to meet the besieging Muslim army and committed saka. Here another point is proved that there is a marked distinction between Sati and Jauhar. Rani Karnavati did not commit Sati on the death of Rana Sanga. She ruled the kingdom till it was evident that they will be defeated in the battle with Bahadur Shah. That is when to secure her nobility and hon our, she committed Jauhar with women of Chittor. Jauhar would not be the wisest choice today, but centuries back that was the only solution. The courage displayed by these women is applaud worthy.

This also dealt a major blow to the egos of the perpetrators, who felt baulked of their prey. It is our honor to have such righteous and esteemed ancestors, who never sold their prestige. I feel that rather than concentrating on the way they did so, we should learn the quality of being morally upright and always stand for our rights and never let down the country, for which so many lives honorably battled. We should focus and marvel at their dedication and pay homage to the honor they never let down in their own eyes and forever remained embedded in the soil of this country. They live in us, in the fire of our eyes, in the power of our speech and most importantly in the brotherhood of our nation.