A Fireside chat with Gunjan Jain 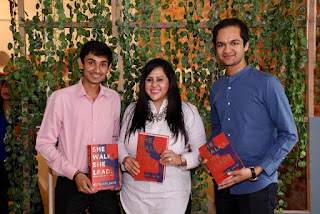 I had the privilege of attending a fireside chat session with Gunjan Jain, the best-selling author of 'She Walks, She Leads - Women who inspire India'. "She Walks, She Leads" is a book which profiles twenty-four iconic women in modern India. These leaders tell their stories, up close and personal. Their relentless ambition to shatter the glass ceiling, their pursuit for excellence and the challenges that came their way – all of this is captured vividly in this exclusive anthology. Each chapter is based on extensive research and has never-seen-before photographs of these luminaries. The chapters are followed by interviews with their companions and close confidants who have seen them grow over the years. The women leaders profiled in the book come from different fields like banking, media, cinema, sports, fashion, philanthropy and industry. 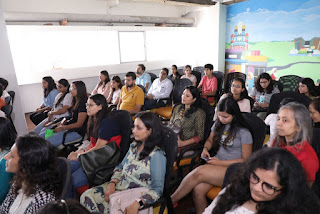 The fireside chat session was held with this brilliant author whose story is no less inspiring than any of them mentioned in her book. It was held at the Openhouse in collaboration with a social youth organization, Yeh Mera India. The session began with a clipping of Shah Rukh Khan, who was the chief guest at her book launch, he recited a poem written by him, here is an excerpt of the poem :
This is for girls who stay up all night,
This is for you who are willing to fight,
For hidden fears,
Hurt, pain, and tears,
Under the smiles, laughs, and giggles we hear.
Let your hair down, straight or curls,
You're beautiful because you fight like a girl.

It was followed by the introductory speech vedio by Nita Ambani, who also hosted the book launch of Gunjan Jain. Nita Ambani praised Gunjan’s commitment to the book, the authors untold story also comes forth, one of compassion and determination. The session progressed with Gunjan being asked about her journey. She said that it took her a long time to complete such an ambitious venture, her dedication and persistence did all the magic. Here she also emphasized on the important aspect of life, that we should always seek help, ask for help and see what wonders it can do. Her venture only materialized because of her hard work and valuable support from many people. She also highlighted the significance of having a mentor, a godmother or godfather, she thoroughly believes that one should have a mentor outside their family too, whom they can approach when they falter in life.
During the conversation she went on to explain how we should wisely utilize time. Time is fleeting, we need to make good use of it, live while we still can. Here she mentioned that go out there and make mistakes, take risks and fail, but do not remain inactive because then you gain no experience either. At least failure teaches you something, doing nothing at all is just squandering away your life. She also said that we live in a world of hyper competition where super specialization is the way forward yet she also believes that multiple identities exist, diversity is what women embody. Human emotions and relations highly interest Gunjan. 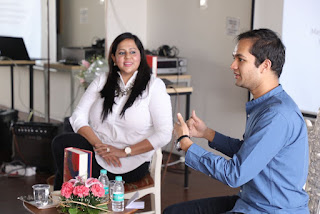 She advised the audience to develop the habit of reading and also the power of networking. The art of seeking help is very essential to grow and achieve ones dreams. She also a spiritual person and believes that the soul only knows love, so her message to the world is to love freely and follow the dream and passion. To be alive and make each moment worthwhile.

It was a great session, a very enriching conversation which highly inspired and motivated the audience. Personally I felt that Gunjan despite her enthralling success and being such an accomplished personality is yet so humble, courteous and graceful in her interactions. She is a true embodiment of a modern female leader who leads by example.