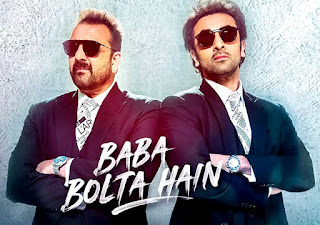 ‘Sanju’ is the biopic of one of the most treasured Bollywood actors, Sanjay Dutt, or "Sanju" as he is fondly called by his friends and peers. Similarly named, the movie is directed by Munnabhai creator and director Rajkumar Hirani and produced by Vidhu Vinod Chopra. The film is inspired by real life events of Sanjay Dutt. It takes one on a roller coaster ride of highs and lows, but most importantly it touches on the spirit of life, of how we rise from the very ashes of our destruction.

Sanjay dutt belonged to the family of cinematic legends, his father, Sunil Dutt was an Indian movie actor, producer, director and politician. Nargis Dutt, Sanjay’s mother was an Indian actress, who starred in many classic films of Bollywood alongside stalwarts like Raj Kapoor and Dilip Kumar. She was highly regarded as one of the greatest actresses in the history of Hindi cinema. This film is on a man with with multiple shades to himself and one who's lived a life of extremes like it were nothing. Sanjay Dutt reaches dizzying heights of success - but also battles numerous addictions and other personal demons.

His story is inspiring for the basic reason of it being so much human and real, no glorifying his acts. The movie begins with Sanjay Dutt, (his role essayed by Ranbir Kapoor) wanting a writer for his biography even while he's preparing to surrender himself to the Supreme Court's judgement in the Arms Act case. A film writer fails him miserably, so Sanju turns to a more established writer Winnie (Anushka Sharma) to pen his biography. His confessions and recollections to Winnie are intimate and give us deep insights into the highs and lows of his life, which is nothing short of a roller-coaster ride. Not much is revealed about his relationship with his wife but it does tell a strong story of an unbreakable bond between a father, son and a best friend.

Sanjay’s relationship with his father Sunil Dutt (Paresh Rawal) forms the major part of this story and some of the most heart wrenching and touching moments in the film belong to both of them. Manisha Koirala as Nargis Dutt (Sanju’s mother) has a brief role, but the scenes between the father, mother and son move you to tears. There’s also his best friend Kamlesh (Vicky Kaushal) who's one of the most important characters in the graph of the story and he leaves a solid impact.

From the relationship between Sunil Dutt and Sanju, one understands that no matter what, family always sticks around. Nargis Dutt portrays the ideal mother who does not want to see his son in pain and wants all the success and joy for him. Sunil Dutt (Paresh Rawal), displays the unending love for a child and the sacrifices one makes for their children. When Sanju was first taken to jail and kept there for 18 months before getting bail, during that time Sunil Dutt used to sleep on the floor without switching on the fan as he believed that Sanju is in similar circumstances. Besides that, the film industry nostalgia and the many references to old Hindi film music keep you hooked on. Sunil Dutt does not give up on his son, he has hopes of improving him, of making him the best version of himself.

The story of Kamli, Sanju’s bestfriend, is something out of the box. Kamlesh forgoes buying his first car to buy a plain ticket to meet his best friend in India. He also makes Sunil Dutt realize that the constant pressure on Sanju to become like him will destroy him, Sanju needs to be told that its okay to just be Sanjay Dutt, that he does not have to become Sunil Dutt. One needs simply grow into the best version of himself.

The first half is extremely gripping, with Sanju struggling with his inner demons. The second half is spent on elaborating his court cases and it reiterates the thought that he’s not a terrorist.

Ranbir Kapoor is just as good as his reputation. To state that he's an incredible actor who fills Sanjay Dutt’s role with gravitas and spunk is stating the obvious. That's expected from a talented actor like Ranbir. But what he does best in Sanju, is that he delivers the central character's swag and nonchalance in the same effortless manner that he displays the seriousness of his sorrows. Whether he's dancing like a hysterical man, or he's having bloodshot eyes under the influence of drugs; or when he’s the broken, emotional wreck just staring blank, Ranbir portrays the variety of Dutt's emotions and grey shades with flair. He's the heart and soul of this film. One of the finest performances in the film also comes from Vicky Kaushal. He stands tall and pulls off a superb act as Ranbir’s best friend, standing by him like a rock.

Yes, there’s a lot missing, but even then, this is still an incredible story of a man and a movie star who made massive mistakes, walked through fire, survived it and lived one heck of a life. You take the spirit of ‘Kar Har Maidaan Fateh’ from the film. A must watch for everyone.