Baikal Ice Marathon offers competitors the unique opportunity to race across the frozen waters of the largest, deepest fresh water lake in the world. Every year the beginning of spring in the Irkutsk Region is inaugurated by the BAIKAL ICE MARATHON. It is Siberia’s largest international sporting event, held 3,518 miles from Moscow. This sports competition is considered one of the most remarkable in the world. This marathon will truly be a tryst with the Nature.

The Marathon is a part of a larger winter games festival, the “Winteriada”, which includes  also “Baikal Kamchatka” Ice Fishing and Baikal Ice Golf Tournaments, Ice Skating Races and a few other outdoor adventure  events.

The surface of the frozen Lake Baikal is covered in fields of ‘hummocks’, small hills of ice rubble. Beneath the ice surface, geothermic springs and seismic activity cause localized melting that weakens the ice to form holes and cracks. Besides, every winter huge ice pressure ridges appear near the marathon course which is flat, but the surface is hard and uneven. The Baikal Marathon is widely regarded as one of the toughest global running events.

On the Baikal Marathon race day, competitors are ferried by vans from Listvyanka to Tankhoy train station, located on the opposite shore of this lake. Before the beginning of the race , competitors some years are required to partake in precautionary ritual of “ white m sprinkling” in order to pacify the spirits of the Baikal. The way is predominantly flat but the surface is hard at times and uneven. Although it’s mostly covered in a soft layer of snow, there are areas of highly polished ice that create conditions similar to an ice rink. The weather is extremely extremely cold and winds can add to the already bitingly cold temperature and provide serious resistance to progress across Lake Baikal. 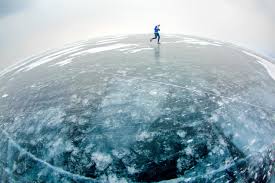 Baikal Ice Marathon is both psychologically and physically demanding. The utterly featureless landscape gives little or no sense of perspective to competitors, offering them nothing to focus on but how far they are from their goal.  It is a long, cold, lonely 42.2 km trail across the barren white landscape, where progress is marked only by checkpoints positioned at 5 km interval where you can get hot drinks and food.  On the very day an award ceremony and a press conference is held followed by a Baikal Ice Marathon Reception Dinner for the participants. Running and skiing marathons at Baikal has more than twenty year history. Every year the number of sportsmen are increasing. Representatives from different regions of Russia and from abroad take part in different marathons like International Lake Baikal Ice Marathon.

People who love adventure and who are fit enough can definitely take part in this marathon. The competitors will surely fall in love with the extraordinary beauty of nature...a wide area clad in a blanket of pure white snow.