- March 06, 2017
Kolkata is known to be a city where creativity is nurtured and passions flamed to keep dreaming alive. Creative voice of singers, artists and poets is one which flows through the veins of the cultural movement of Kolkata to voice out tolerance and peace message to sustain humanity and equality in all. One such creative voice is Musician Pavlu Banerjee who through his songs in his First English Solo Album “Long Way To Go” is voicing against the social ills like female foeticide, rape, child prostitution and basic rights of women. As women day is approaching where throughout the world creative people will be getting together to bring positive change ,we interview Pavlu to know more about the passion of music and his creative voice. We hope you will get inspired to do the same and work towards your passion. 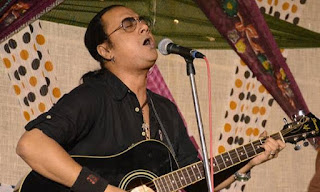 1.Tell us something about Pavlu, the Musician.

Ans: What music is to me is like comparing what water is to fish. Music is my first love and is my soul mate that’s why any single day spent without music is very depressing to me. And I also believe that music has no boundaries thus I listen to all types of music and sing them as well. I am an English &amp; Bengali Singer Songwriter, Guitarist and arranger from Kolkata. Personal emotions and reflections of various shades of the society often get depicted in “Poems” which we can call the “diaries” of a poet and when a “poem” gets nicely weaved and merged with a “tune” they mix and become one soul to form a “musical diary” or a "song”. That’s what my songs are all about. They are more of “Musical Diaries”.

2.How did your first solo album “Long Way to go” happened? What is your inspiration behind the songs?

Ans: I have been composing English songs since 2002.Since I started writing &  composing songs I always thought that people will be able to relate themselves with my songs. So When my first Bengali solo album “Spondon Khoron” got good response I decided to do an English solo album. And as English is an international language I hoped I’ll be able to reach out to more people with my songs. My first solo English rock album “Long Way to Go “ consisting of 8 original English songs written, composed and sang by me will get released on 26 th Feb. In this album Subrata Acharya had played Lead Guitar,Rishiraj Basu is the bassist and the recordist of the album and Bappa Karmakar has played drums. The album has a variety of songs. The album is already available in itunes,amazon,spotify,saavn etc .I hope people will like it.

Generally reality is very harsh and a creative person has difficulties accepting the various social ills, our present scenario is becoming worse and women are being subjected such rage that I felt “ Long Way To Go” was a way to speak out against such violence and rage. 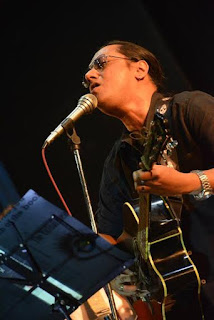 3.You have your band and your own home studio, How important these are in creating a perfect song?

Ans: Due to professional reasons I had to take a break from active music for 16 years, but in the meantime I composed more than 150 English and Bengali songs. So when I got a chance to do music seriously again, my primary objective was to record at least one third (about 50) of the songs which I have written since 1996.when you have a home studio you get  more freedom, that’s why I decided to have a home studio of my own called K.M.D home studio, my band member Rishiraj Basu is the recordist of our KMD home studio. As I do pure rock music I will not be able to do justice to my songs without good bass guitar, lead guitar and drums. That’s why I have a band for my solo line –up called “Pavlu Banerjee & Band” where Subrata Acharya plays lead guitar,Rishiraj Basu plays bass guitar and Bappa Karmakar is the drummer. If I didn’t have the studio or the set up and the basic drive to create, I wouldn’t ever be able to express and speak out. Well I’m deeply inspired by Western Rock ,Metal & alternative music in general.

4.Tell us something about your taste of music? What genre do you generally like to compose on?

Ans:I believe in music without boundaries. So I love all types of music from Indian classical to English heavy metal. As a composer I have tried to work with different types of genres like folk music,fusion,rock,alternative and heavy metal. But as a composer, personally I prefer doing Rock music and heavy metal.

5.After living for so many years in Kolkata, what has according to you been the journey of musicians?

Ans: To be very honest I would humbly say it’s very tough to survive and earn bread and butter for your family as a musician in this city. 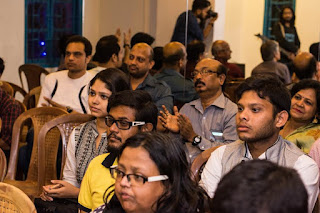 6.What else do you do you do apart from composing music?

Ans: I run education centres of Govt. of West Bengal which is related to Information Technology.

7.What is required to be a musician according to you?

Ans:I think Firstly love for the music,dedication,patience &amp; practice is required to be a good musician.

8.Tell us something about your previous performances.

Ans:I have performed in Doordarshan,Zeal Tv in WB khadi silver jubilee utsav where we were given a memento for our outstanding performance. I have also performed Indian Museum Centenary Hall, other than this I have performed in various places in Kolkata in the last 2 years.

9.What you are expecting from your album “Long way to go”?

Ans: I hope that the audience will like it and maybe somewhere it will bring a positive change in thoughts.

10.Your message for music lovers.

Ans:Music is the best healer, Music can bring peace. Music gives peace of mind, I personally believe that “Music” can bring peace and harmony among us despite all the restlessness and intolerance across the world. I only believe in music and peace, I strongly believe they can co-exist together very well.

So my message to music lovers is “Keep listening to more music and please support Original music.”

If you are inspired reading this, you can connect to Pavlu Banerjee on fb and listen to his music on youtube as part of Kolkata Music Dairy his songs are available at iTunes,savan,gaana.com,amazon,Spotify,YouTube,soundcloud etc 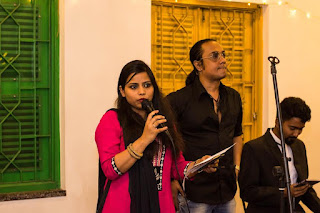