Education, if looked at beyond the
conventional boundaries, forms the very essence of all our actions. What we talk, what we perceive, how we behave, is all through what we have learned or observed. Education forms the basis of one’s personality. Human is a social and emotional animal. He needs to communicate with others, understand others perception and express himself for living an appropriate and meaningful life. This all could be achieved by education. Education provides him knowledge, technique, skills and information. It enables him to know his rights and duties towards his family, society and towards their motherland at large. Education provokes the desire to advance to achieve.

India is a socially and economically developing country. On the path of development, the country is facing many problems. One of the basic problems is that of education. India is a country with more than one billion people, and just one-third of them can read. The rapidly growing size of population, poverty, shortages of teachers, books and insufficient public funds to cover the education cost are some of the nation’s toughest challenges. This the future of the country, where ‘children’ are facing the basic problem. The rate of drop-outs is increasing ever since the poverty has come into role. Poverty has proven to be the major reasons for the decreasing literacy rates. When earning a livelihood and taking care of  family members become a primary matter of concern, education becomes little or no chance of pursuance. For the underprivileged people in India, education is perceived as high-priced luxury, and this negative outlook continues with every new generation. 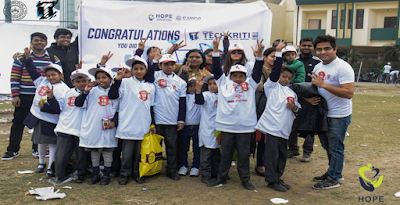 it comes to moulding, children are the most susceptible to change. It is necessary to mould children to become better citizens and know their duties towards their nation’s development. Education of children in India has become a fore-most  concern. To deal with this serious issue, IIT KANPUR, has stepped forward this year with EDUCATION as its primary concern of the social campaign conducted under TECHKRITI’17. This 23rd edition of Techkriti has taken an initiative to spread the awareness for education, mainly to the underprivileged section of the country. This year as a part of social initiative and outreach, it has launched “Helping Opportunities with Promoting Education”, popularly known as H.O.P.E.

Secondly, a road trip is going to be organized covering around 8 cities in Kanpur during a suitable time which is yet to be anounced. This includes educational sessions in schools for underprivileged. In these sessions, the students will be knowing about the modern education techniques through presentations. Science workshops will highlight some fundamental aspect of science. The main aim is to create awareness among the children and inculcate in them the urge to get educated. Another aim  of this workshop would be to kindle scientific temperament and critical thinking. To pass the message to a larger number, a marathon will be conducted. It will be taking place in the first week of January. This marathon is for increasing awareness of importance of education in lives. Apart from education, agricultural innovation and social entrepreneurialism will be other issues raised. 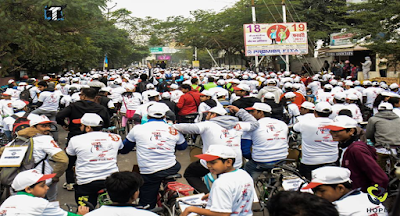 Apart from these initiatives, zonals are going to be held. Along with technical workshops, events will also be organized under these zonals. The winners of these events will be invited to IIT KANPUR for next round. For the awareness purpose, the students of the respective cities will be getting a petition signed by numerous people, supporting the awareness of education for underprivileged. In addition to this, ‘vastra yogdan’,a cloth collection drive is also being conducted.
Education is a game changer. Education is the tool which can alone inculcate national and cultural values. Education expands their vision and outlook. Education is only means by which poverty in the country can be eradicated.  Education is thus a means to stir up the consciousness of the people against injustice, violence and disparity generally resulting in unrest and violence. Just as a face is the mirror to the heart of the person, level of education reflects the status of a nation.  Hence to reap the real fruits of growth and achievement of the country, the issue of education should be dealt be seriousness.