What special food are your preparing for your Sunday guests, when asked to Mrs. Sharma she echoed the same words like the others in her group, “biryani”. The palate satisfying dish has now become a current hot favorite not only of Mrs. Sharma but tons of people. This diasporafavorite is generally made with spices, rice and meat. Although the exact origin of biryani is as yet unknown although various conjectures are there that this dish came along with the Mughals butcertainly we have transformed the spice, the flavor of this dish into our own. Areas where rice is the staple food like Hyderabad, Telangana, Tamil Nadu distinct varieties of biryani are present. Andhra seems to be the only region there having no native varieties.

Although certain sources said that the dish came along with the Mughals especially with Babur similar sources have also argued that the origin of this dish brought its roots with Timur. Although association between “biryani” and” pulao” or “pilaf” has often been raised but certainly all are miles apart. As in the case of pulao it is much simpler and can often be cooked with vegetables which are not the case with biryani which is much thicker in consistency.
So now that we have more or less probed and are familiar with some of the basic facts lets delve into the native and the varieties of biryani which they offer.

The first type is the Kacchi biryani also known as the kacchi yeqni. It is cooked with meat and yoghurt layered and hardly with fish and prawns. The pot is often sealed with the wheat dough and is allowed to cook in its own steam and not opened until it is ready to serve.

The next type is the Tahari biryani, which was basically developed for the Hindu book keepers of the Muslim Nawab. It is mainly prepared with potatoes which act as its chief ingredient. If you go to Kashmir you will often find yourselves tasting the delicious Tahari as the street food, for there it is often sold on streets. Another reason why the Tahari became more popular is, during World War 2 when meat prices soared; potatoes came in as the savior and went on to be substituted in the place of meat.

Kalyani biryani or beef biryani as the name implies uses beef as the chief ingredient more popular in Hyderabad. What is interesting about this dish is once you taste it the flavors of tomato, jeera, dhania comes out distinctly. 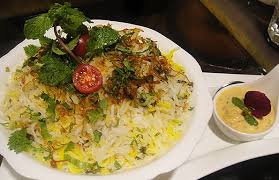 Well, you guys have already heard about potato biryani or Tahari as the name is, but ever tasted Bhatkali biryani? Are you trying to guess what is it? Well it is “onion” biryani to put in simple words. It became popular when the Arabs married the Jains. Although the presence of other ingredients can surely be felt, but one can definitely vouchsafe after tasting it that onion is definitely its main ingredient 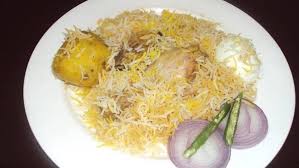 Last but definitely not the least is our native biryani the Kolkata or Calcutta biryani. On this note let me tell you something very interesting, often the dishes develops their name from the place of origin like “Hyderabadi” biryani or “Sindh” biryani. The fact that biryani is something which has originally evolved from places like Delhi, Lucknow way before it came to Kolkata often results in more  distinct variations in its type, ingredient which makes it more awesome for the biryani lovers. Now let us come back to Kolkata biryani. The originator and its root mainly goes back to Nawab Wajid Ali Shah and his personal chef when he was exiled. In comparison to the other types the “Kolkata” biryani is definitely lighter to consume.

This succinct and detailed description other than inducing the taste buds also shows that no matter what befalls on us, we ultimately do nurture the capacity to change it into something likeable for us, with which we can suffice ourselves, starring from fodder and ending maybe in the G.S.T implementation and definitely waiting for more to come, for ultimately this is how life is, and this is how we are.