The Radical Array Project popularly known as T. R. A. P. which turned 3 years this August had a rambling conversation with us wherein they confided several of their experiences. This band set in the suburbs of Kolkata aspires to enthuse among its audience a spirit of new music with variation in taste and quality which is heartily appreciated by their fan followers.

Beginning with the introduction of the five member band consisting of Suanjito Dutta (the drummer), Swapnabho Roy aka Papai (the bass guitarist), followed by Ronnie Chatterjee (the guitarist, production manager) , Bhaswar Sen ( the Violinist) and Anupam Pyne ( the key board player) began the conversation.

When asked what was their inspiration to start the band, replied Bhaswar Sen, "the inspiration was to do something unique, apart from doing covers of famous bollywood and western music, the agenda was to perform instrumental music in our own way". They told us how they had a different team before. Back in school, Suanjito and Bhaswar were together where they formed their band but unfortunately they disintegrated.  Later Suanjito, Ronnie's senior in college brought them together and they happened to meet Anupam Pyne in the Echo Rehearsal pad in North Kolkata where they got to understand that the wavelength of all the them were at par with each other and the vacancy of the key board player was fulfilled. Their already base guitarist left TRAP disheartened but they feel lucky enough to find Papai as their talented Base guitarist now.

"Why the name TRAP?" we asked them. 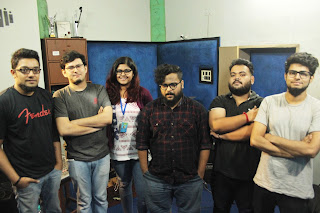 "I was crazy about the Raghu Dixit Project back then  so I  wanted the term Project in my band. Also, Radical because I wanted to prove the genuineness of our music, Array because that was a term used in IT and since three of us were engineering students" said Bhaswar Sen with a heartily laugh.

When asked Ronnie who also is a backing vocalist sometimes where most of their performances are instrumentals, that whether a vocalist overshadows the essence of music here's what he had to say, "No, in our case it doesn't happen that way, we are an instrumental band basically and since people want us to play bollywood covers and etc we are bound to suffice the audience and feature a vocalist plus a financial necessity also arises for aspiring bands. However these kind of shows do turn out pretty well where the audience requests for GOT and Sherlock theme music covers and that's really amazing.

"We experiment with music" said Papai

“The fun of our sound is that the odd counts" exclaimed Anupam Pyne. Suanjito's take on this was “to keep it simple for the listeners and for the musicians to be a treat."

All the band members nodded a big "NO" to drugs and they don't feel its a necessity in the field of creativity because the authenticity of their music lay in their fineness and purity not in their mood of dizziness. They don't feel one requires sedatives to keep one in the mood of flow as rhythm plays inside their soul. 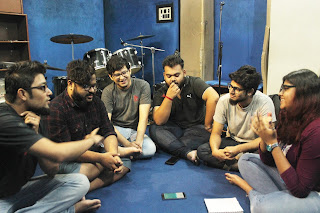 "The taste of music among the audience has gone through a drastic change, so do you think you are being able to live up to the expectation of the many?" we asked them after the break and this is what they had to say:

"In our latest composition Middle Earth, we have fused Irish Folk with Bengali Folk instruments and it was not that we intended to do that, this composition aired into our heads. We are always in pursuit of doing something new for the audience and also for ourselves, only to keep the entire atmosphere in fresh aroma."

They claim to have been the green eyed monsters among themselves sometimes but its always in good humor. They have envied other bands before but they said for the sake of music they just couldn't let jealousy take a hold of them and deviate them from their focus which is to be "UNIQUE".

Lastly they concluded with messages for the audience and here's what each one of them had to say:

It’s time for people to accept and listen to all the types and different music being produced today and then judge the music scene of our city.
---- Suanjito

I would like to say the same thing as said by Suanjito that is to try and support the talented musicians of the city and understand the difference they're trying to make.
----- Papai

I would like to add on to what they both said, that we know the uniqueness you want and we are already there and we are trying. You just need to see us more vividly and maybe we'll be able to give you more of what you demand.
----- Ronnie

Thank you Kolkata for being there with us and we expect more support from you guys.
-----Bhaswar

We still hope that you, the listeners will support underground music besides mainstream music.

T. R. A. P. is really lucky to have such love and support backing them up and they feel it is really commendable, and they are hoping to welcome more enthusiasm and encouragement to keep their performances going with a head-bang. All the five of them said in unison at last that "We don't create New Music for the sake of it, we create New Music because Uniqueness lay within us”

Interviewed and Written by: