IT IS NECESSARY THAT PEOPLE ARE MUSICALLY EDUCATED TO ENJOY IT, IN ALL ITS FLAVOURS. –ALO-The Band talks about their journey right from its inception till today.

Interviewer – Who is the founding member of the team? Is this your core team?

Syamantak- Sarthak(the drummer), and I are the ones who founded the band, and no this is not the core team. We became so, eventually with time as we got hold of the other talented musicians to add up to us.

Interviewer- Why according to you is the name “Alo” suitable for your band?

Syamantak- Alo, means “light” in Bengali and when we create music, we do it with the purpose of enlightening people’s lives, because light is like a ray of hope and we want people to be filled with joy when they listen to us. Although we weren’t Alo at the beginning, the name was previously Aroha, but unfortunately we had to alter the name cause there were many other bands with the same name. Hence on the day of our first competition we changed it to Alo without informing the organisers(laughing hearitily). Also the fact that we preach Lalon Fakeer and to remove “ L” from the former and “N” from the latter part of the word, it comes down to “Alo”. 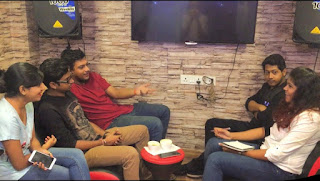 Interviewer- It is known that you guys indulge in Bangla folk, Bollywood rock and the likes, but apart from these what would be your own preferences?

Syamantak- We do all kinds of music, we experiment with music. We don’t really prefer  anything in particular. We’ve also done EDM with folk. I personally listen to folk and Sufi music a lot.

Sarthak- We don’t represent any particular genre, we believe that every genre is equal and we treat them accordingly by inter-mixing them but i do have an affinity towards EDM, jazz.

Aritrya- We are composing a unique blend of EDM and rock music. You could also not imagine that Lalon and folk music could be combined with rock.

Interviewer – What is that which drives you to create music?

Syamantak- Music runs in our blood, it’s an adrenaline rush. Be it any mood, it’s always music to the rescue.

Interviewer- Where do you see Alo in the near future?

Aritrya-  In people’s hearts at least. There certain songs that people listen to, on the repeat mode. We want ours to be on that playlist, and create such music that people can relate to.

Syamantak-there’s an instance where once after our show, a guy came upto us and he said that he was rejuvenated after hearing us. His girlfriend had died a week back and our music, as he said, gave him the incentive to come back to form. That was a great honour for us and we want it from all people we cater our music to.

Interviewer – Apart from music what is that which keeps you all connected?

Syamantak –  Fun is what binds us. We all are a weird and crazy bunch of music fanatics, but to specify, our bassist Alex( Ranadeep Sen) is the weirdest.

Interviewer – How does it feel to be winner of the Mirchi Band Hunt and securing the 34th rank among  1,500 plus bands in India? 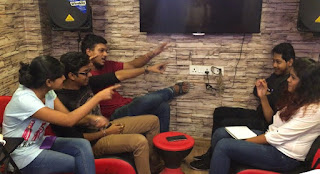 Sarthak- it was achievement and we never thought we’d win.

Aritrya- The day before the competition, we had a show after which we returned to Sarthak’s place at 1am at night and sat down to compose an original song that was a requisite for the competition. After whole night’s hard work, we went to submit the song at 9:30am that day.

Interviewer- After having performed gigs at so many prestigious colleges, does it make you greedy for more?

Sarthak- Greedy is a very relative term. That is because if we are greedy for public’s love and support then yes we are greedy, because that is what keeps us going.

Syamantak- if having the hunger for more public acceptance is greedy then yes, because we use greed as motivation , that gives us the incentive to work better and harder. Although our guitarist Arko has a different concept because he is a man of seriousness and however the band is today, be it the organisation, discipline, decorum it’s because of his sincerity to keep us at the tip of his fingers.(everyone laughs)

Interviewer- Along with the purpose of lighting up the lives of your audiences, what else do you want from them?

Sarthak- We want them to listen to us until we stop producing music, that is until we die, to touch every heart.

Aritrya – I want my audiences to be educated musically rather than having biased opinions about music and breaking the stereotype. We want to open to the audience the doors of diversity.

Syamantak- we have a term in Bengali “ALO JALO” , but what we literally mean is to light up people’s lives in way that they must be awakened in all realms of life and music being one of them.

Alo ended their conversation with heart filling messages for their audiences and hoping love and support from the same, but one important message that they wish to convey to their listeners is-

Written and Interviewed by
Subhangi Ray