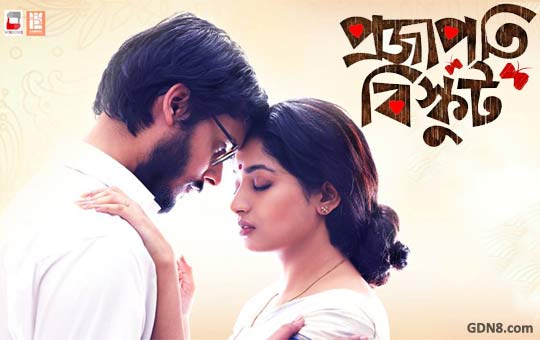 After the remarkable debut with Open Tee Bioscope, singer and actor Anindya Chatterjee comes with his second movie Projapoti Biskut. Presented by  the famous duo Nandita Ray and Shiboprasad Mukherjee, and produced by Windows production house, the movie deals with the theme of love after arranged marriage and the gradual development of the nexus between the couple.
While the debut movie relived the memories from the school days and concentrated on the bonds of friendship, the recent one concentrates on life after arranged marriage and the gradual blooming of love. The film cast includes  Ishaa Saha, Aditya Sengupta in the lead roles and other eminent actors like Aparajita Auddy and Rajatava Dutta in the supporting roles. The movie is a simple and a sweet tale of a couple, Shaon played by Ishaa Saha and Antor played by Aditya Sengupta. However, the movie does not appeals much in the initial phase where the boring lifestyle and the suppressed emotion of the house wife is depicted. The second half of the movie appears more intriguing and the concept of marriage is challenged while the expected norms and behaviour of the wife shatters her into pieces as she tries to masquerade her actual self and her lifestyle for the sake of her elite class cultured  in - laws. Although she tries her best to adjust with the changed lifestyle and her in laws specially her mother in law , she finally breaks loose while trying to have a child . With time when situations become hard to handle, she challenges the institution of marriage and the conservative mind-set of the people around her. However, the initial discomfort,hesitation,distance undergoes a stricking change and the couple eventually falls in love with time.
The director has portrayed the characters of the present generation as meek and soft spoken while the older characters are comparatively out spoken in nature. Although the story has a good content but it somewhat fails to appeal to the young generation as such. Aparajita Auddy as usual stands out with her remarkable performance and even the other actors have done justice to their roles. Sung by famous singers like Anupam Roy, Anindya Chatterjee and Shantanu Moitra,the music of the movie deserves special mention along with the occasional comedy  popping up, balancing the movie in every direction. All together, the movie Projapoti Biskut gives the audience a happy note which every person would like and the faith on the institution of marriage is re-established after many hurdles that the young couple goes through.