A Gift from JB to the Beliebers 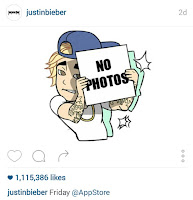 Something has been creating quite a buzz among all the beliebers!

The 22 year old singer has released his own emoji app following the footsteps of kim kardashian west and amber rose when he released his range of messaging graphic symbols this friday. 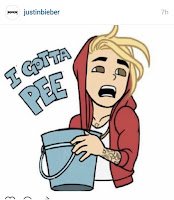 Its the 'JustMoji App' . Fans can now download tons of emojis of the singer in many different styles.

The emojis feature different animated versions of the hitmaker,including images of JB holding a 'no photos' sign,flashing his abs and saying 'SORRY', his famous Calvin Klein underwear,a canadian flag and much more! Maybe more interesting are the emojis he has included in his app that poke fun at his troubled past.

A few of the infamous bieber moments captured in emoji form,including his arrest,alleged egging incident and the time he really had to pee in a bucket! 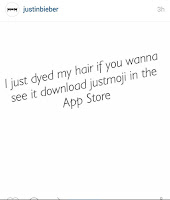 Now the only question is will Justin's passionate fandom finally dethrone Kim Kardashian's KIMOJI APP?  It is said that Kim made 1 million dollars every minute after launching the app.
Time will say, but for now go download the JUSTMOJI APP available exclusively on iTunes!