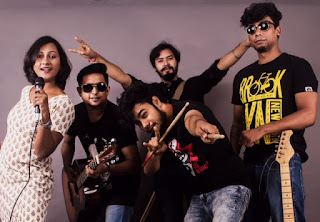 One of the euphoric bands existing in Kolkata, are The Miliputs who are soaring heights now with maximum likes and views on their latest release on youtube. The five member band comprising Debmalya Dey( guitarist), Sharoni Poddar( lead vocalist ), Akash Debnath( guitarist), Debanjan Das ( drummer/percussionist), Arindam Roy( bassist ) talked about their experiences all through 4 years and how they managed to surpass all, with ups and downs.

Interviewer : Who founded the band and why?
Debamalya Dey : It was Sharoni and I who founded the band back in 2012 and we started off with Rock music and the like. However we formed a proper band in 2015 when we began to experiment with Folk, while it wasn't named Miliputs and collaborated with other members to concretely form the band.

Interviewer: What it is about the name "Miliputs"?
Sharoni : We were searching for name and it is basically named after me( my nick name is Mili) and since my name is Mili, i was never up for it but Debmalya insisted that this should be it, as he thought that it was catchy and attractive and people would be able to relate mili with Miliputs.

Interviewer: You started off with Rock, so why so much emphasis on Folk, now?
Debmalya : Initially we did covers of other songs from Rock bands but later on we decided to experiment with other varieties of music. Meanwhile, when we were listening to other genres of music we realized that Sharoni was being able to relate to the Bengali folk lyrics and since then we were decisive that folk would be our theme alongside rock because we really could connect to that blend.

Interviewer: What would your three consecutive preferences be, besides folk?
Debmalya : They would be our own compositions which are more or less on the rock folk format and then it would be Fusion.
Sharoni : I am basically a classically trained singer but whatever limited knowledge I have about classical I try to use it in a unique way in our compositions. The Bandishes i have learnt I am sure that not all people have learnt the same and are fusing it the same way but the way Miliputs uses them is really a different and unique format which people are liking and not everybody is performing.

Interviewer: You have contemporaries who also indulge in Folk, so do you think somehow you might get overshadowed?
Sharoni : everybody has their own way of doing music and we feel that our way of music is ours and only ours and is not to be compared . No music is meant to be compared and we are not here to compete and compare but to only perform.
Debmalya : I also think as long as you are doing your part of the job, that is to focus, it does not matter who thinks what about you or what opinion they have of you.

Interviewer: What is the current song on your playlist?
Debmalya : Kichu din mone mone by Miliputs itself
Sharoni : It was our latest song released in Bangladesh and i was listening and trying to detect faults so as to improvise later on
Debanjan : It is Kajal Bhromora.
Said all with a hefty laugh!

Interviewer: At any point of time were you afraid than there might be differences among you which might lead to disintegration of the band?
Sharoni : Differences keep on happening but there is one principal that we follow and that is all the members have to be punctual once the rehearsal and recording is scheduled. Also people have difference in taste of music, for example Debanjan was fond of metal but we introduced him to Bengali Folk and let him have a tryst with it to grow his interest like growing a taste for wine(said giggling) .

Interviewer: Who was your inspiration?
Debmalya : It goes back to the 90's when the first Bangla Rock Band Fossils has created a deep seated impact on me. Rupam Islam did his part of enthusing that spirit of music in the youth.
Sharoni : my inspiration was different and that was because I came to know about rock bands in the very later stage of my life, when I was 20. My family and I will mostly listened to classical and I had to escape home to go and listen to this kind of music as presented to me by my friend Debmalya, and it was quite late when my first song was released that my parents got an insight into the kind of music I am involved in and that was when they supported me and I had to never look back since then.

Interviewer: What change do you seen in yourselves from 4 years back then to now ? And where do you wish to see yourself in the next 5years?
Debmalya : Initially we were not matured enough to compose our own music but as time passed by we acquired the gravity to understand the taste of music in the city and create compositions accordingly.
Sharoni : We have no specific aims of being very successful but yes our main agenda is that , people must like us and the fact that they are enjoying our music is pleasurable to us and makes us very happy as a band. So, the more we are approachable to the people the more happy we are, the more we are able to satisfy the taste of the people the more motivated we are.

Interviewer: your latest song has crossed about 400K views on YouTube what is your take on that?

Debmalya : I think it is quite a big achievement for us as as far as i know, not all bands have crossed such a huge goal.
Sharoni : It is kind of a milestone for us because it has rejuvenated our mood and made us aware of how fortunate we are to receive such positive feedbacks.
Debanjan : This is an unbelievable reciprocation from unexpected audience to whom we are highly obliged for having liked us and for having given such a treatment to our song.

They all concluded with the message that all must listen to their music, and share their feedbacks with them so that they can improvise and give the best they can to their viewers. The Miliputs feels really privileged to see people love them and nothing more can suffice their happiness. It's the audience applaud that works as their motivation.