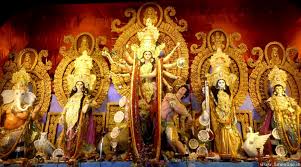 It is never clear when exactly it strikes us that Pujo is coming. Is it the maddening crowd at the shopping malls weeks before the actual five days of puja starts? Is it the hammering of the workers who create the pandals? Is it the sound of the first strike on the dhaak? Is it the guys turning up at your doorstep asking for chanda? Is it the legendary Birendrakrishna's voice on the radio on the day of Mahalaya? Whatever it might be, once the fever sets in there are no bounds to the enthusiasm welling inside the heart of every Bengali. The artists in Kumartuli have poured their heart and soul into their creations and now it is time to see and appreciate them.

The preparation for the biggest occasion for the Bengalis starts much before though, for it is more than just a religious festival. It is a hotchpotch of art, culture, music, merrymaking and madness. It continues up to the second before setting foot out of the house for pandal hopping: Girls straightening their curly hair or making their straight hair curly (for one's never contented with the way they are); guys asking their barbers to give them the haircut of their favourite celebrity; then they would flock into the shopping malls. Nothing beats the enthusiasm of people bargaining with the sellers on the footpaths of Gariahat and Hatibagan, " Na dada 300 te e din." The happiness in the eyes of these people on the streets of claustrophobic nightmare is difficult to miss as they shop for themselves and their loved ones.

Talking about Gariahat and Hatibagan reminds me of the clear distinction between the two types of puja in Kolkata: the bonedi (household) puja and the theme based puja. If one is familiar with north Kolkata puja the term would not be unfamiliar. North Kolkata being the old Kolkata is the heart of heritage and cultural puja. Many royal families celebrate Durga Puja with the same pomp and splendour as that of the brand sponsored ones of the south. The Pujas in the south flaunt the various awards they have received for the past several years. The main focus is on the creativity as they try to bring various innovative ideas to their creation. Taking inspiration from the famous art of Ajanta and Ellora to modern fantasy fiction like the Harry Potter series they compete for the best theme every year. Needless to say this is a major generalisation.

Let us not forget the third type of puja, the para-r (local) puja. Competition is never their goal. Their goal is to keep the puja spirit true to itself. You would never find huge queues being controlled by the police or the 'DSLR guys' assuming painful stances to get the best angle for the shot. What you will find is the children's laughter as they play games that we adults would never understand. The occasional chant of mantras by the priest and the sound of the dhaak would sometimes break the calm and serenity that is so alien to Durga Puja.

The WhatsApp groups that are named like Saptami, Ashtami, etc get created weeks before the Pujas and the discussion never seems to end - which area to cover which day, where to get the passes; Sometimes the rain plays a major spoilsport and tries to wreck the month-long plans of the pandal hoppers. Since the past few years I have noticed a very interesting change. Earlier people used to start going out on Saptami and their numbers weren't too big. Ashtami onward the crowd started congesting the streets which finally culminated into the climax of one-step-a-minute procession on Navami and finally on Dashami it was all over. But nowadays I find people going out on Chaturthi itself! The idea is to avoid the crowd. But with so many people having the same idea it turns out to be a very futile endeavour.

You know your last night pandal hopping was a good one when you can barely stand the next day. Caught in a strife between looking good and feeling comfortable you had chosen maybe the high heels and now you can barely keep your feet flat on the ground without giving yourself cramps. Or maybe you bowed to the heat and your gustatory desires and had too much ice cream and cold drinks and now sound like a crow (if you can talk at all that is). But not everybody enjoys the Pujas in the same way. Some people prefer to sleep away the entire Puja days. Some find this to be the ideal time to binge watch their favourite T.V. shows or tick off the items in 'Need to Watch Movies List' where as some people like to escape the hustle and bustle of the Puja days and visit some other place. Not that I have anything against them, but I feel that the best place to be in, during the Pujas, is Kolkata. But then again I can't blame the people who having suffered months under the corporate pressure now wanting to see what the world has got to offer.

Those leaving on the main road are fortunate enough to see every Durga idol of nearby pandals being taken away for bhashan. A band of musicians playing totally 'unrelated music', if I may put it that way, lead the procession with people of all ages following them. Some are intoxicated, some are sober, but all doing the notorious bhashan dance with childlike glee. The sound of the drums brings many faces close to the windows of the houses playing a small memory game: which one is this? Is it the Jodhpur Park one or the Babubgan one? But slowly even the last idol sinks leaving behind memories and empty pandals. We say "aschhe bo6or abar hobe" and start counting again.